You go at night into immensity,
Leaving this green earth, where hawthorn flings
Pale stars on hedgerows, and our serenity
Is twisted into strange shapes; my heart never sings
Now on spring mornings, for you fly at nightfall
From this earth I know
Towards the clear stars, and over all
Those dark seas and waiting towns you go;
And when you come to me
There are fearful dreams in your eyes,
And remoteness.  Oh, God!  I see
How far away you are,
Who may so soon meet death beneath an alien star.

Mabel Esther Allan was a young woman in her mid-20s living near Liverpool when World War II started in 1939.  Last month I commented on how her description of the 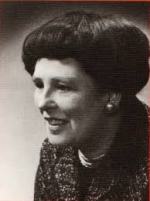 impact of a bombing raid on Wallasey had a universality that spoke to us today as we survey images from battle scenes in different parts of the world.  In this earlier poem she is more personal in her writing, reflecting on the experiences of a young airman.

In the early years of the war it’s easy to just think of the RAF in terms of the Battle of Britain, and conjure up images of young fighter pilots sprawling outside their mess-rooms waiting to be called into action, and then wheeling across mid-summer skies as they battle against almost impossible odds.  The other less well-remembered  story was that of the RAF’s night raids into Germany, a campaign that took the fight to the enemy rather than just defending the home territory.

The impact of this campaign upon the lives of those in Britain is touched upon by the poem which considers how those different conflicts, the military and the emotional, create distances between aircrew and their loved-ones.  I also imagine that it reflects the experience of my mother, as her fiancee – who became my father – enlisted in the RAF at about this time before being posted to north Africa.

The poem concerns the feelings of those left behind, and yet it reminded me of an earlier poem from the World War I in which a different message is conveyed by narrating the war from the perspective of the airman.

An Irish Airman Foresees His Death

I know that I shall meet my fate
Somewhere among the clouds above;
Those that I fight I do not hate,
Those that I guard I do not love;
My country is Kiltartan Cross,
My countrymen Kiltartan’s poor,
No likely end could bring them loss
Or leave them happier than before.
Nor law, nor duty bade me fight,
Nor public man, nor cheering crowds,
A lonely impulse of delight
Drove to this tumult in the clouds;
I balanced all, brought all to mind,
The years to come seemed waste of breath,
A waste of breath the years behind
In balance with this life, this death.

In contrast to Allan, the poem by Yates has a more nihilistic message: in part this derives from the ambiguity of Anglo-Irishness during the First World War – a time when many from Ireland had volunteered to join the British armed forces, and many others continued to agitate for the independence from British rule.

The poem was inspired by the death of Robert Gregory, an Irish sportsman and flying ace who died on active service in Italy during 1918, and is one of several poems that Yeats wrote in his memory.  Robert was the son of Lady Augusta Gregory and Edward Martyn, both established Irish literary and political figures and friends of Yeats who was a regular visitor to the family estate in Galway – Kiltartan Castle in Coole on the west coast of Ireland.

Gregory’s cricket accomplishments (both bowling and batting) still stand in the Irish record books and he was also a talented artist.  He trained at the Slade School of Art after Harrow and Oxford, and had several successful exhibitions in both Paris and Chelsea.  He was 35 in 1915 when he volunteered for service in the Royal Flying Corps, and married with three children; like Edward Thomas about whom I’ve also written, he was not a naive or beguiled teenage volunteer infantryman.

In such circumstances you might have expected him to be brimming with an enthusiasm for life or moral purpose, but the poem describes a self-effacement, almost an ennui, in which his presence is no more substantial than the air he breathes.  There is the exhilaration of soaring flight, but absolutely nothing else: there’s neither hate nor patriotism to explain his presence in the arena of war, and nothing he might do that will either improve or worsen the lives of the people he has left behind.

WB Yates, as a major Irish literary figure in his own right, had been asked in 1915 to write a political poem about the war for an anthology to raise funds to help Belgian refugees, but he declined the invitation.

I think it better that in times like these
A poet’s mouth be silent, for in truth
We have no gift to set a statesman right;
He has had enough of meddling who can please
A young girl in the indolence of her youth,
Or an old man upon a winter’s night.

Yates was in a difficult position at a time when Ireland was both contributing to the war effort and continuing to struggle for political independence from Britain.  He was aware of how such a contribution might be perceived by the Irish rebels and his reputation as an Irish patriot was unquestioned after the The Easter Rising in April 1916 and the subsequent civil war.  Yeats poems about the war were not published until 1919 when collection The Wild Swans at Coole was issued, and he was elected a member of the new Irish assembly after independence was secured in 1922.