Skip to content
Date: 16 May 2019Author: South of Watford

I Saw A Broken Town

I saw a broken town beside the grey March sea,
Spray flung in the air and no larks singing,
And houses lurching, twisted, where the chestnut trees
Stand ripped and stark; the fierce wind bringing
The choking dust in clouds along deserted streets,
Shaking the gaping rooms, the jagged, raw-white stone.
Seeking for what in this quiet, stricken town?  It beats
About each fallen wall, each beam, leaving no livid, aching place alone.

Mabel Esther Allen lived on the Wirral, and was 25 when the Liverpool Blitz started in 1940.  The main targets of the bombers were the docks, warehouses and shipyards on both sides of the River Mersey, but the railways and factories were also attacked so no 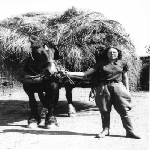 part of the city was safe.  The attacks started in August 1940 and continued until May 1941, with the heaviest attacks taking place just after Christmas 1940 and in May 1941 when over 650 aircraft attacked the area each night.  By the end of the bombing campaign 4,000 people had been killed including 332 in Wallasey.  Mabel’s contribution to the war effort was to join the Land Army, and then worked in an inner city school with kids who’d been bombed out of their homes.

The poem resonates because it remains relevant: The choking dust in clouds along deserted streets conjures up those images from Manhattan on 9/11 when the twin towers fell and the dust swept outwards.  Or those images from Syria, Afghanistan, or Iraq after the aircraft have passed.  Even this week many of us have watched the burning of Kings Landing and its occupants as part of an evening’s television; it was fiction, but no easier to watch and perhaps the closest many of us might get to experiencing the terror of an aerial attack.

Today there’s a riverside promenade in Seacombe and Wallasey with manicured lawns and floral displays in summer; at low tide you can walk the beach.  The chestnut trees are magnificent in spring.  If you look closely you might notice a space where a house used to be, or notice that a few buildings are significantly newer than their neighbours.  But this poem takes my imagination back to that moment of transition when it must have seemed that the world was ending.

After the war Mabel Esther Allan became a prolific author of children’s books with 170 titles published before her death at the age of 83 in 1995.  She wrote under several names, including Jean Estoril as the author of the Drina The Ballerina series.  She’s probably not known very widely today as there are only a few titles currently available on Amazon.  However, I’ll return to her work next month with another poem worthy of  rescue from the dusty old bookshelf of neglected poetry.