I haven’t written about animals before and my subjects have been mainly people, places, or events.  Considering how animals flourish and thrive elsewhere online, they were bound to turn up here sooner or later so why not as part of the Third Thursday sequence.

Billy Collins is an accessible American poet who writes, irritatingly, with an apparent ease about domestic subjects you thought you might tackle yourself.  After reading some of his stuff you can feel as if you might never write another line again.  In one of his early collections, The Apple that Astonished Paris, he writes a few poems about various family pets, and there are cat and dog poems in there that I like.

Putting Down the Cat

The assistant holds her on the table,
the fur hanging limp from her tiny skeleton,
and the veterinarian raises the needle of fluid
which will put the line through her ninth life.

‘Painless,’ he reassures me, ‘like counting
backwards from a hundred,’ but I want to tell him
that our poor cat cannot count at all,
much less to a hundred, much less backwards.

The neighbors’ dog will not stop barking.
He is barking the same high, rhythmic bark
that he barks every time they leave the house,
They must switch him on on their way out.

The neighbors’ dog will not stop barking.
I close all the windows in the house
and put on a Beethoven symphony at full blast
but can still hear him muffled under the music,
barking, barking, barking,

and now I can see him sitting in the orchestra,
his head raised confidently as if Beethoven
had included a part for barking dog.

When the record finally ends he is still barking,
sitting there in the oboe section barking,
his eyes fixed on the conductor who is
entreating him with his baton

while the other musicians listen in respectful
silence to the famous barking dog solo,
that endless coda that first established
Beethoven as an innovative genius.

And the ubiquitous barking dog reminds me, at this timely moment 50 years on from the first moon landings, of the animals that ventured into space before them – most of all Laika, and then Strelka and Belka, the Soviet space dogs.  Poor Laika never made it back and is probably still out there but a Finnish poet was caught by the story of Laika even though her mission had started in 1957, eight years before he was born.

When Laika, abandoned in space, barks

When Laika, abandoned in space, barks
the lights in the hovels come on, one by one.
It might already be seven o’clock, iron might fall
from the sky, but the law of physics,
written on stone and gastropod shell,
still drives this blue village.
And so is the votive lamp lit,
so does its oily heart grow warm
and dream shadows dance on the wall.
Somewhere a lonely dog peers down at Earth.
I am guarding this planet, she might be saying
when she barks, but, you know, those radio stations,
all those messages, the sky is full of them,
full of the satellites’ clatter and hum. 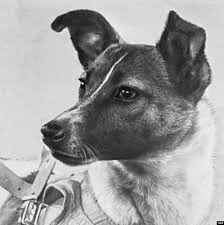 It was said that the Soviet scientists used captured strays for their expeditions:  it was believed they would have developed a natural cunning and tough survival instincts that would make them more adaptable and resilient in flight than specially bred animals: it was the tough proletarian street dog rather than the pampered bourgeois pooch that led the way into space.  Although Laika’s fate is unknown (the official Soviet story is probably very different from the reality), Strelka and Belka made it back OK, and Strelka went on to have a litter of six puppies – one of which a gift from the Soviet Union by Nikita Khrushchev to JFK’s daughter Caroline.