After the big fire at Windsor Castle in 1992, an inventory check revealed the absence of a significant item: there was no trace of it, nor any evidence of any charred remains.  The object in question? A golden crystal chandelier.

The missing chandelier had been a gift from Kaiser Wilhelm II to George V in 1911, on the occasion of his cousin’s coronation.  The extravagance of the gift wasn’t welcomed because of the escalating political and military tension between Britain and Germany in the years leading up to the outbreak of First World War.  It would have been imprudent to display such an ostentatious example of imperial German grandeur anywhere near the public gaze, and the outbreak of war provided a convenient opportunity to squirrel it away and forget under the pretext of placing it in ‘safe keeping’.

Not everyone forgot about it however.  After Irish independence in the early 1920s, the government realised it needed a new building in Belfast for the Northern Ireland parliament, and Stormont was constructed especially for this purpose.  When it opened in 1932 visitors were suitably impressed by the grand entrance hall regally adorned with 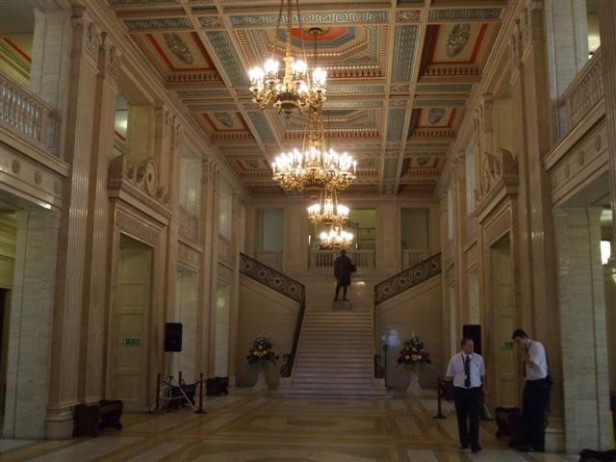 a golden crystal chandelier.  Someone decided it was an opportune moment to retrieve the unwelcome gift and despatch it to a distant provincial city out of harms way, but seemed to have neglected to record the transaction in the Windsor Castle records.

Today, on the mezzanine floor you can stand alongside the chandelier and see the Kaiser’s Imperial German eagles in a circle, glaring back at you between the lights, wings spread and beak open.

It is said (by Alan* – our conspiratorial unofficial guide) that the Royals did try to claim their chandelier back after not noticing it had been missing for 60 years.  As it’s still there, you can imagine what they might have been told to do with their request – in that challenging Ulster accent.

Follow South of Watford on WordPress.com
Join 141 other subscribers.