Whan that Aprill with his shoures soote
The droghte of March hath perced to the roote,
And bathed every veyne in swich licour
Of which vertu engendred is the flour,
Whan Zephirus eek with his sweete breeth
Inspired hath in every holt and heeth
The tendre croppes, and the yonge sonne
Hath in the Ram his halve cours yronne,
And smale foweles maken melodye,
That slepen al the nyght with open ye
(so priketh hem Nature in hir corages),
Thanne longen folk to goon on pilgrimages,
And palmeres for to seken straunge strondes,
To ferne halwes, kowthe in sondry londes;
And specially from every shires ende
Of Engelond to Caunterbury they wende,
The hooly blisful martir for to seke,
That hem hath holpen whan that they were seeke

That’s a bit odd isn’t it? Yep, Chaucer as it was written. That’s the text I encountered at school in Liverpool back in the 1960s. Fortunately, help was at hand courtesy of Penguin books in the form of a translation by Neville Coghill who provided a more readily understandable version:

When in April the sweet showers fall
And pierce the drought of March to the root, and all
The veins are bathed in liquor of such power
As brings about the engendering of the flower,
When also Zephyrus with his sweet breath,
Exhales an air in every grove and heath
Upon the tender shoots, and the young sun
His half-course in the sign of the Ram has run,
And the small fowl are making melody
That sleep away the night with open eye
(So nature pricks them and their heart engages)
Then people long to go on pilgrimages,
And palmers to go seeking out strange strands,
Of far-off saints, hallowed in sundry lands,
And specially, from every shire’s end
In England, down to Canterbury wend,
The holy blissful martyr, quick
To give his help to them when they lay sick.

So, with he help on hand, we too – in suburban Liverpool – started our pilgrimage to Canterbury. I can’t remember which of my mates made the discovery but we found it easier to understand 14th century English if we “read” it in a Scouse accent. Why not try it yourself in your own local dialect to see if the trick works for your accent too? Let me know if it does!

At this time of lockdown, the urge to go on a pilgrimage isn’t the greatest of feelings to be encouraged by pleasant spring weather, but Chaucer’s depiction of sun, warm breezes, fresh rain, green shoots and birdsong capture the vigour of springtime, and the urge to shake off the winter blues. At present I’m fortunate to be able to experience the change of seasons in the relative safety of a garden, but know I’m missing the swathes of woodland bluebells that you can also find at this time of year. Perhaps instead I’ll dig out the DVD of one of my favourite old films – Powell & Pressburger’s A Canterbury Tale from 1944.

As one of those wartime movies that celebrates ‘Englishness’, A Canterbury Tale features a land girl, a British soldier and an American soldier solving a crime in a small village on the outskirts of Canterbury. The film opens with a group of pilgrims on horses and in 14th century costume with a Chaucerian-type character reciting a verse about the tradition of pilgrimages to Canterbury. One traveller, with a hawk on his wrist, releases the bird and watches it soar into the sky and hover in search of prey. The hovering bird then transforms into a fighter plane that swoops across the screen, watched by the same actor – but this time dressed as a soldier riding in a military vehicle. It’s the same match-shot trick later used by Stanley Kubrick in 2001: A Space Odyssey when the caveman’s club sends a bone flying into the sky to transform into a space-ship. The Powell and Pressburger film however maintains the pilgrimage theme: our three characters solve the crime and reach their destination in Canterbury where each finds appropriate fulfilment of their respective ambitions; Kubrick’s film goes in a very different direction!

Chaucer was born into a relatively wealthy family of merchants in about 1340, (the exact date isn’t known) and after legal training started in the court of Edward III in 1657. He participated in the 100 years war and at one point was captured by the French, and released in return for the payment of a ransom. He served in various administrative and diplomatic roles for the king, but was also writing to the effect that in 1374 he was awarded the prize of a gallon of wine a day for the rest of his life. Although the precise reason for this isn’t known, it is thought to be as an early (perhaps the first) appointment as a poet laureate, although that exact post wasn’t officially created until 1668.

He wrote several eminent works that have survived to the present day and although The Canterbury Tales is the most well known, it is the one that 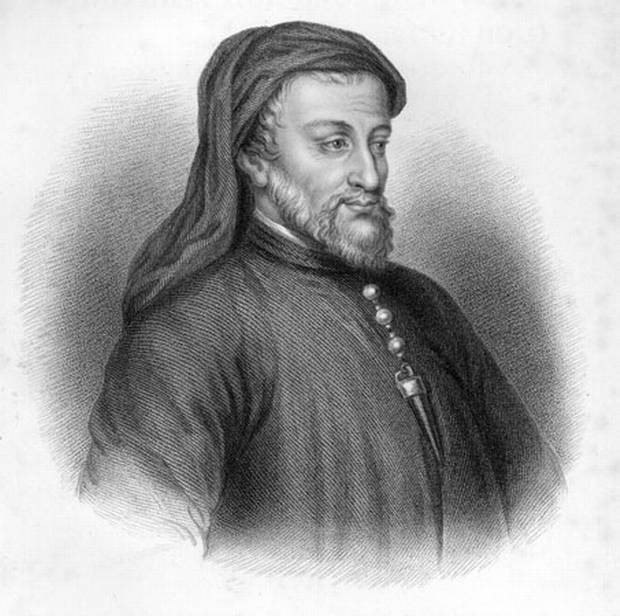 was never completed. It was planned as a series tales in verse form narrated by the various pilgrims on the journey from London to Canterbury. Thirty pilgrims would each narrate four tales – two on the way to Canterbury and two on the way back – and the teller of the best tale would win a free meal. About 90 different versions of the manuscript exist and nearly every one has different stories in a different order; today the most popular collections today include 24 stories and over 17,000 lines of verse which is still a great achievement even if it falls short of its ambitious target.

Chaucer doesn’t have the monopoly of views on April however, and one of the celebrated alternatives can be found in T S Eliot.

April is the cruellest month, breeding
Lilacs out of the dead land, mixing
Memory and desire, stirring
Dull roots with spring rain.
Winter kept us warm, covering
Earth in forgetful snow, feeding
A little life with dried tubers.
Summer surprised us, coming over the Starnbergersee
With a shower of rain; we stopped in the colonnade,
And went on in sunlight, into the Hofgarten,
And drank coffee, and talked for an hour.
Bin gar keine Russin, stamm’ aus Litauen, echt deutsch.
And when we were children, staying at the arch-duke’s,
My cousin’s, he took me out on a sled,
And I was frightened. He said, Marie,
Marie, hold on tight. And down we went.
In the mountains, there you feel free.
I read, much of the night, and go south in the winter.

This is less than a quarter of the first part of a five part poem, and the whole poem runs to more than 630 lines, but you should get a sense from these few lines that Eliot represents a very different type of poetry. I’ve just realised too that on this occasion I’ve not been able to include a complete poem as both works are too long for that.

In an earlier draft, Eliot had this section towards the middle of The Waste Land rather than at the beginning, but after this revision the contrast with Chaucer becomes more explicit. Eliot presents the view that April is more cruel than sweet as it’s as it revives the past, and removes the warm comfort blanket that winter allowed you to snuggle under and forget.

In this short section too, we suddenly encounter a different narrative voice and this type of shift recurs throughout the poem – here we are suddenly eavesdropping on a pampered cosmopolitan elite: Starnbergersee for example is Lake Starnberger just south of Munich, an elite resort area since the days of King Ludwig of Bavaria; the German text translates as “I’m not a Russian at all, I’m from Lithuania, a German really”, the sort of thing that a certain type of person might say a just a few years after the Russian royal family had been executed by the Bolsheviks.

The reason I like Eliot is because of those voices and you can always get a distinct sense of who the narrator is. The Waste Land cuts between

different vernaculars – including working class London, middle class blandness, and aristocratic hauteur; it draws on quotes from Edmund Spenser, Shakespeare, Chaucer (as indicated), Dante, and many other literary, theological and classical sources; he even includes his own earlier poems by referencing Sweeney in one part. It’s a bit of a detective game to decode the meaning in places, and some it is a bit pretentious, but it is an achievement to be envied, and it’s one of the reasons I always find revisiting his work so interesting.

There’s nearly 650 years between Chaucer and Eliot, and yet there is a connection between them: Chaucer writes about the pilgrims on their journey to Canterbury, but Eliot also writes about the origins of that journey; Murder in the Cathedral is Eliot’s 1935 play, in verse, about the martyrdom of Thomas Beckett, Archbishop of Canterbury, in 1170 at Canterbury Cathedral.

Chaucer and Eliot also coexist, spiritually if not materially, in Westminster Abbey’s Poets’ Corner. Chaucer was actually buried at Westminster Abbey as it was where he once worked, and also where he lived until his death in 1400. In 1556 his remains were moved to a more ornate tomb in the south transept as his posthumous literary reputation grew, and the section now known as Poets Corner was created around this space with later additional memorials to celebrated literary figures, and others.

Eliot died in 1965 and was cremated in Golders Green before his ashes were interred at St Michael and All Angels’ Church in East Coker, near Yeovil in Somerset. East Coker is the title of the second part of Eliot’s Four Quartets, a series of four long poems published in the 1940s. East Coker is the village from which Eliot’s ancestors emigrated to America in the 17th century, and the burial fulfilled a line in it which runs

Although his remains are interred elsewhere, a memorial for Eliot was installed in Westminster Abbey in 1967, two years after his death. The most recently installed memorials in Poets’ Corner were for Philip Larkin (died 1985, installed 2016) and P.G. Wodehouse (died 1975, installed 2019).