The schoolboys still their morning ramble take
To neighbouring village school with playing speed,
Loitering with pastime’s leisure till they quake,
Oft looking up the wild-geese droves to heed,
Watching the letters which their journeys make;
Or plucking haws on which their fieldfares feed
And hips, and sloes; and on each shallow lake
Making glib slides, were they like shadows go
Till some fresh pastimes in their minds awake,
Then off they start anew & hasty blow
Their numbed and clumpsing fingers till they glow;
Then races with their shadows wildly run
That stride huge giants o’er the shining snow
In the pale splendour of the winter sun.

serious climate change I wonder how many more generations of mischievous schoolboys will ever again play with snow, and slide on ice, on their way to school.  I did my fair share of arriving in school with ‘numbed and clumpsing fingers‘ (what a great word that is) but it wasn’t from sliding on shallow lakes and plucking winter fruits from rural hedgerows; rather it was snow scooped from low suburban walls and privet hedges.  By the time we got to school some others would have engineered a huge ice slide across the diagonal of the playground but by the first mid-morning playtime the caretaker would have ensured that grit and rock salt and removed what the teachers saw as a hazard but what we all thought was just good fun.  And the winter snow would usually last for a couple of weeks while any snow we get today is likely to have disappeared with 48 hours.

Our winters now seem to be characterised by storms, high winds, driving rain, and ice-cold winds from the Arctic or Siberia.  Maybe milder winters come with the territory, being South of Watford, but I can’t help but feel that a few weeks of snow each year should be a part of every child’s birthright.  Piloting a sledge or toboggan down a steep hill in the park is as much a part of winter as playing cricket for a few weeks is a part of every summer (before the soccer starts again).

John Clare’s world, rural Northamptonshire in the early 19th Century, is far distant from our current times two hundred years later.  Although his writings were neglected and relatively unheralded until recently, his work is now recognised for the voice it gave to local dialect (clumpsing fingers) and its record of a pre-industrial life-cycle celebrating the seasons, the wildlife, and everyday village life.

Clare was 70 when he died in 1864 and you might think that his longevity John was due to a stress-free pre-industrial rural life; regrettably this wasn’t the case.  At the age of 42 Clare was committed to an asylum where he spent the last 27 years of his life.  For the 15 years leading up to his committal he had been torn between the responsibilities of supporting his family as a farm worker in Northamptonshire and travelling up to London to meet with publishers and participate in the contemporary literary scene.  From time to time various benefactors would pay off his debts, or pay the rent on his cottage, but the stress of this dual life led to depression, heavy drinking and increasingly erratic behaviour.  His supporters ensured he received sympathetic and supportive treatment and he was encouraged to keep writing; although some of his work from this period is among his best, it was long and sad ending to such a talented literary career.

Sara Teasdale was born in St Louis, Missouri, a few years after John Clare’s death and her poetry has a resonance with issues that are still current.  Sara started writing in the early 1900s and, like Anna Akhmatova in St Petersburg at about the same time, was part of a literary and artistic community in St Louis that published her work. 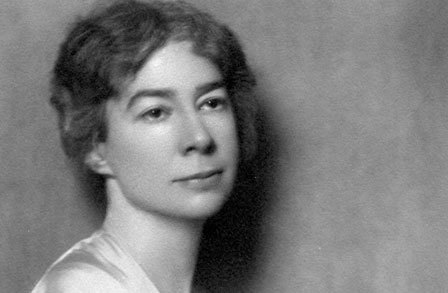 My window-pane is starred with frost,
The world is bitter cold to-night,
The moon is cruel, and the wind
Is like a two-edged sword to smite.

My room is like a bit of June,
Warm and close-curtained fold on fold,
But somewhere, like a homeless child,
My heart is crying in the cold.

This poem was published in her collection Helen of Troy and Other Stories.   Whereas Clare had seen winter as a natural part of the annual cycle to be celebrated as much as any other part of the year, Teasdale sees winter as something to be endured, to be survived.

In A Winter Night Teasdale describes how she is insulated from the rigour of the season and enjoys the warmth of summer in her home while the destitute and homeless try to avoid freezing to death on the street, she also describes a coldness, an iciness, a loss, in her heart.  And perhaps it’s that coldness in her heart which colours the view from her window – maybe that frost is on the inside of the glass rather than the outside.  The moon is often associated with goddesses rather than gods, with women, so maybe this moon is a manifestation of her feelings about some unspecified person or event that’s the source of her pain.

Sara Teasdale had a troubled emotional life and for several years was courted by Vachel Lindsay, another established contemporary poet, who greatly admired her.  Lindsay is an interesting character as he was an advocate of spoken rather than written poetry and would travel across America on money he made from performances and recitals in the communities he visited on tour.  Sara however rejected him in favour of a businessman whom, she believed, could provide her with greater financial security; she married in 1914 but divorced him in 1927.  Shortly after her divorce she made contact with Lindsay again, to discover that he had married in 1925.   The Wall Street Crash in September 1929 resulted in Lindsay losing most of his savings and investments and created financial worries to the extent that he took his own life in December 1931, aged 52.  Thirteen months later, in January 1933, Sara Teasdale took her own life at the age of 48.

Follow South of Watford on WordPress.com
Join 141 other subscribers.