Adrian Henri died in 2000.  He was only 68 and had never fully recovered from a stroke he’d experienced a few years earlier.  I loved the guy, and this is an early example of the poems he’d read in pubs, at gigs, and later to a backdrop of folk-blues-rock.  I’ve written about him before (January 2019) in the context of the impact The Mersey Sound had on popular culture 50 years ago but think his work deserves highlighting in his own right.

Adrian was an artist in the broadest sense of the word: he went to art school, taught art, 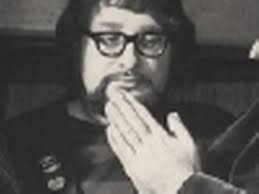 and exhibited his own work.  He wrote poetry, developed a performance poetry circuit with other writers (notably Roger McGough and Brian Patten), and diversified into music performance with his band The Liverpool Scene.  He liked a pint, he like painting, he liked writing poetry, he liked writing poetry about painting, and jazz, and poetry about poetry.  He loved talking to people, and was generous with his encouragement of other young poets and musicians.  His sheer force of personality and enthusiasm for living could carry you along to the point were eventually you might stop and ask yourself the following day what the hell had all that been about?

“list” poems where he gets on riff and then just bowls along with a succession of images that illustrate the point he is making.  For example there is The Blazing Hat, Part Two in which every line starts “This is the morning that…” and there follows a surreal list if incidents that range from the likely to the improbable.  Great War Poems lists ten cliches from practically every WW1 poem that you’ve read.  Without You describes exactly the 40 things you might imagine happening if “You” weren’t there anymore – from ” every morning would be like going back to work after a holiday” to “the first martian to land would turn around and go back home again”.

Adrian Henri helped make poetry democratic.  He demonstrated that you didn’t need rhyme or metre but if you had imagination and vocabulary then you compensate for that.  He got us to see that poetry wasn’t just something you read in the classroom, but it was something you’d write at home, and read out loud in a pub in town. He helped us educate ourselves by referencing his own cultural influences and encouraging us to find out what he was talking about with his repeated references to Alfred Jarry, Charles Mingus and James Ensor, among others.

Finally, one of the other characteristics of Adrian was that even after all the hype, and the publicity, and the books, and the rock tours of the UK, Europe, and the USA, he didn’t retire to the home counties, or London, or California, or Provence, but he stayed in Liverpool.  His audiences might have moved away to other places because they (we) needed the work, but Adrian remained in the place that he loved.  And I loved him for that.

if you weren’t you, who would you like to be?