I detected a darkness in Berlin.  Some places ooze peace and tranquillity and it’s very easy to unwind; Ireland’s ancient east is a place such as this, but in Berlin there were areas in which you sense unease, a psychic coldness, places in which terrible things had happened.  I wasn’t surprised to experience such feelings in Belfast too, but didn’t expect to sense the darkness across such a wide area – from the bleakness of the city centre to the neatness of the suburban lawns.  It’s hard to write anything about Northern Ireland from a neutral standpoint as anything that doesn’t conform to the orthodoxy of the loyalists, or the republicans, is dismissed as a distortion of their truth.

The civil war in Northern Ireland lasted from 1968 to 1998, and killed over 3,500 people: just over half of these were “civilians” caught between the warring parties, about a third were members of the security forces, and the rest were the paramilitary terrorists fighting for “their people”.  In the early years of the struggle there was a structural and constitutional injustice that needed to be addressed, but after a few years of terrorist bombing campaigns and sectarian executions any notion of moral high ground by either party had been eliminated.

The Good Friday agreement was reached nearly twenty years ago but you don’t get any  sense that the place has moved on very much since then .  The Titanic Quarter is impressive in parts but is just the first stage of what they say is a one hundred year development plan, and that’s easy to believe; most of the funding for infrastructure projects comes from the EU, so I don’t expect much further progress.  Belfast had been a city in which nothing new had been built for thirty years and it’s struggling to catch up with the rest of the world.  There’s evidence of progress, but there are whole blocks of derelict buildings where shabby vandalism and graffiti  is not mere hipster affectation or lifestyle choice but the real thing.

There are no quick fixes for a city with so many of its people having a 17th Century sectarian mind-set.  The gable ends of inner city terraces are painted with murals that celebrate gunmen and terrorists.  They are considered suitable tourist attractions and feature on postcards and souvenirs, but they are not relics of a bygone age.  Along the suburban arterial roads, as throughout most of the region, there are multiple union flags, flags with the red hand of Ulster, and flags of loyalist paramilitary groups like the UVF and UDA.  Many of these flags fly from lamp posts with civic approval, and others fly from private premises.  It is against the law to remove a flag without the permission of the person who raised it. Loyalists still talk of being under siege and persist with their juvenile marches and bonfires. 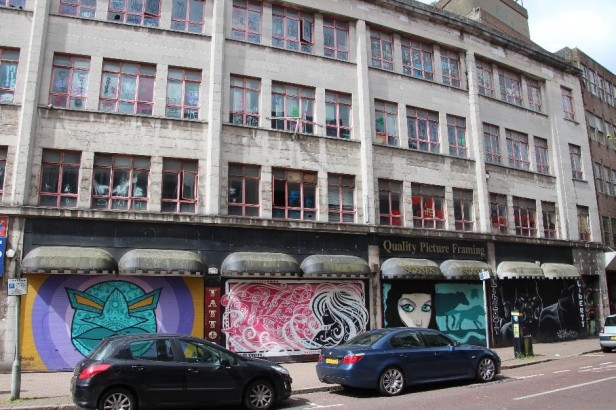 Publicly everyone you meet says the old days are over and they encourage you to return, to keep visiting, to keep spending, to keep believing that they’ve changed.  But they go back to their houses in the neat suburbs strewn with paramilitary regalia and think that’s normal.

The politics haven’t moved on much either.  The Northern Ireland Assembly is suspended again as the terms of a power sharing arrangement can’t be agreed.  The stalemate and intransigence at an executive level is just another manifestation of the sectarian bigotry so evident on the roads of Northern Ireland.